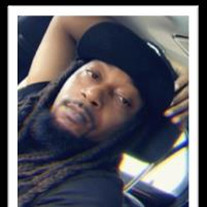 Domenic Delvecchio Ingram, affectionately known as "Dinky "to family and friends, was born on July 27, 1979, in Charlotte, NC, to Gloria Anita Ingram and Addison Irby Jr. he transitioned from this life to next on Saturday, October 24, 2020, at his home surrounded by his family.  Domenic was a devoted and loving family man. Many men often said that they idolized him for being a great example of what a father should be. He supported his children in every way with their needs, aspirations, and goals. His kids often referred to him as "Mr. Make It Happen" because no matter what they want or need, they knew he would make a way. Domenic attended West Mecklenburg High school in Charlotte. His first job was at Bojangles on Freedom Dr., the Westside of Charlotte, not far from where he grew up. Later in life, Domenic started his journey with southwest metal as a warehouse forklift driver and worked to become a lead supervisor. That position became an office in which he was so proud. Just like my younger brother Woo, who he loves to drive a nice car, his favorite car growing up was his White Acura, but when he finally got his Mercedes AMG S550, you couldn't tell him anything. Dinky was also a devoted and loyal Panther fan; his love for football started at an early age where he played n serval community football games on Columbus Circle. He went from being a star football player to being one of his son's football team's head coaches football team U-City Irish. Domenic was defiantly known as the family's father figure; he was always willing to listen and give unfiltered advice with love.  Domenic was preceded in death by his son Isaiah Thomas,and Grandmother Alice Mae Ingram, Father Addison Irby Jr., and aunts Deborah “Aunt Duke" Hill and Yvonne Ingram Uncle Charles “Uncle Jr" Ingram. Domenic leaves to cherish his memories to his loving mother, Gloria Ingram-Sellers (Tommie Sellers); beloved children, Jerrica Moffett, Dominique Ingram, Armani Ingram, and Syncere Ingram, the mother of his children; Felicia Thomas and Jerterriann Moffett; his dedicated brothers - Tommy Ingram Addison Irby III, and Damon Ingram, his nurturing sister; Monica Ingram, Latarcha Robinson, Chicobie Robinson, and Ronishia Dean; Grandson- Kaiden Williams caring Aunt Joyce "Aunt Laine" Murray; devoted cousins Sharod, Jomo, and Stoney supportive Nieces Monikka and Gloria; loyal Nephew Tra' Vonta. His special friend Alton, Ervin, Petty Ray, Trice, and Keon and a host of aunt uncles cousins' nieces' nephews and all HIS CIRCLE TRAP FAMILY.

Domenic Delvecchio Ingram, affectionately known as "Dinky "to family and friends, was born on July 27, 1979, in Charlotte, NC, to Gloria Anita Ingram and Addison Irby Jr. he transitioned from this life to next on Saturday, October 24, 2020,... View Obituary & Service Information

The family of Mr. Domenic Delvecchio Ingram created this Life Tributes page to make it easy to share your memories.

A comforting word from you means a lot.

Send flowers to the Ingram family.